This Ain’t Your Father’s Reform Judaism

I grew up in the Reform Movement, through URJ Eisner Camp, URJ Kutz Camp, and NFTY, but something shifted in me while in university, and I felt myself move slowly away. Maybe it was going to Brandeis and meeting all those deeply committed Conservative and Orthodox students, while my Reform friends drifted away and stopped coming to services, stopped celebrating Shabbat. Maybe it was the year in Israel where I studied in yeshiva and went to the Western Wall regularly and davened in traditional circles.

Or maybe it was the memory of my confirmation class, when my teacher said “Kashrut (kosher) was for health in those days. Nowadays, it’s outdated and dumb. No Reform Jew needs to practice it,” and the day of Confirmation itself, when the rabbi flatly refused to let a classmate wear a kippah. (We were rebellious in those days. As the strains of “God is in His Holy Temple” began on the organ, each one of us – girls included, which was then unheard of – drew a kippah out of our robe pocket and put it on as we marched down the aisle.) Our parents sent us to URJ camps, but the rabbis made fun of our newfound passion for Judaism by telling us we were “bordering on Conservative.” The youth group joyfully did Havdalah before our movie nights but the presidents of our congregations refused to add Havdalah before a Saturday night social for families, saying it was “too religious.” 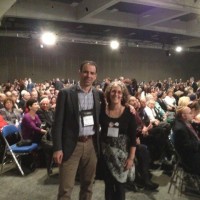 The Reform Judaism I grew up with was, quite frankly, more concerned with not looking Orthodox than it was with teaching me any positive value in being Reform.

I tried being Orthodox for awhile, but my feminism got in the way. I tried being Reconstructionist, but my strong supernatural concept of God got in the way. I tried Jewish Renewal, but I fall asleep in meditation, and I’d rather shuckle than do yoga. I never toyed with being Conservative because my need for consistency got in the way. I just couldn’t grasp hold of a positive, joyful, traditional, and spiritual Judaism within any of the movements, and I wandered around for many years looking for home. This past URJ Biennial helped me find it. First, the service leaders sang “O Canada” and put up a Canadian flag, which opened my now-Canadian heart. Then they said we could sit for Sh’ma if it was our custom to do so, which publicly valued and normatized a custom I’ve practiced for 20 years and one that I instituted at my synagogue. Then came the gathering of tzitzit on my tallit, something I’ve done silently and privately all these years. Next, mourners were asked to rise separately from the rest of the worshipers for the Mourner’s Kaddish, something I longed to do at a Biennial many years ago when I was in a year of mourning myself. OK, it was also the clapping and dancing and 13 Torah-reading tables and Bibliodrama, along with a silent Amidah. My traditional side was finally recognized; my spiritual side was finally satiated.

I came to Biennial with trepidation, as it was not universally accepted in my new synagogue for us to be Reform-affiliated. Many members doubted this idea, and many still identify with the Conservative Movement. During the application process to become a URJ member congregation, they did not feel moved, no matter how I preached the vision of Reform and its “best practices.” They fear the Reform they remember as being churchy and sterile. They fear the Reform they remember of lack of kippot and lack of Hebrew. Traditional Canadians, they honestly worry about flying the flag of Reform in a community where Conservative is still the norm. I knew the workshops and plenaries would be fine. I knew the call to tikkun olam would be loud and clear. I knew the speakers would be powerful. But would the davening be davening, or would it be “services”?  Would we “rise and recite the watchword of our faith?” Would we sit for the standing prayer? Would we drone on in responsive readings?

When the chair of our Leadership Team came with me, with some degree of doubt, I couldn’t quite explain how far the Reform Movement had come for him. He had to see it with his own two eyes. His response after attending the Biennial? “This is awesome. Next time, our whole team should come.”

This ain’t my father’s Reform. It can finally be mine.

Elyse Goldstein is the rabbi of the URJ’s newest congregation, City Shul, in Toronto, Canada, which was voted into membership at this Biennial.