September 20, 2018, NY, NY – The Union for Reform Judaism’s youth programs create quality, lifelong Jewish outcomes, with benefits that extend to the next generation. New research proves that across different types of experiences, the Reform Movement delivers youth programs that have long-lasting impact on participants’ Jewish identity. Alumni choose to actively participate in Jewish community, find meaning in Jewish ritual, do good in the world, and choose Jewish education for their children. 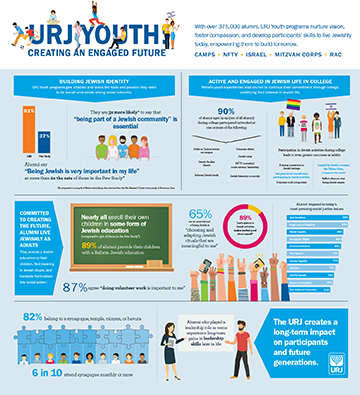 The survey of more than 3,000 alumni (aged 25+) was compared to the Pew Center’s study of American Jewish Life and offers a representative sample of more than 375,000 alumni of URJ youth programs. The detailed findings and methodology of the study are available at www.URJYouth.org/Impact.

“The data vividly demonstrates that having had Reform Jewish experiences as a teen – in the context of NFTY, URJ Camps, or other congregational teen experiences – is strongly associated with an array of Jewish outcomes later in life, the effects of which are boosted by Jewish engagement during college-age years,” Miriam T. Chilton, URJ Vice President of Youth, said of the findings.

“Our research on the URJ’s impact reveals a continuum of influence that starts during a person’s childhood and youth, continues through their college years, and sees expression in Jewish engagement and identification during adulthood, even many years later,” said Alex Pomson, Managing Director, Rosov Consulting.

Among the key findings:

The data supports the importance of young people having immersive Jewish experiences. As the Jewish community faces challenges to retain active participants, the URJ’s youth programs prove to be an antidote, offering a future of engaged adults and active global citizens looking to pass along their Jewish values and education to their children.

Methodology: In September 2017, a survey created by Rosov Consulting was fielded to alumni of Reform teen experiences and others connected with the Reform Movement through a variety of distribution channels. The survey received 3,296 responses of which 2,180 were alumni of Reform teen experiences. Post-sample weights were applied to correct known biases in the sample in terms of age and gender. The data collected by the Pew Research Center in its 2013 study of Jewish Americans was used for this purpose, as it is presumed that the Pew data offer a reliable representation of the age and gender among all raised-Reform individuals in the United States. The Rosov Consulting team has undertaken two parallel approaches to analyze and make meaning of the data collected, comparative sample and multiple hierarchical regression analysis.

8 Ways You and the URJ Created Light in the World This Year
Dec 23, 2019|Ruben Arquilevich