How to Affirm Life in the Wake of Tragedy

How to Affirm Life in the Wake of Tragedy 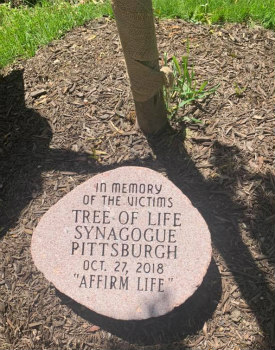 Every Jewish congregation and institution in the country has been grappling with new concerns around security since the tragedy at Tree of Life synagogue in Pittsburgh last October. Ours did that too, but we also were given a gift that enabled us to respond with memory, resolve, beauty, and hope for the future of the Jewish people.

When the massacre occurred, our lay leaders, school staff, and I spent the last hours of that Shabbat and the following day helping the congregation begin to cope with their grief, fears, and anxiety. Chief among our worries was how to help our members feel safe to come to the synagogue and then to mark the tragedy appropriately in worship.

Of course, our community was not alone in experiencing incredible support and solidarity from the local police, the interfaith community, civic leaders, and every day citizens. Security became an ongoing theme of the year, and we all became used to new entry procedures that we at first thought might be temporary. It is sad to think that they now seem just “normal.” Frankly, we were so focused on these concerns that we did not think about any kind of permanent memorial to the tragedy, until a gift changed our perspective.

Friends of the congregation and (full disclosure) my brother and sister-in-law, David and Julie Feingold, had the vision to provide our congregation and some other Jewish synagogues and institutions with which they have a relationship, a living memorial, a tree, to “keep alive” the memory of those who lost their lives to hate and violence at the Pittsburgh synagogue. We announced the gift to the congregation on Tu BiShvat, the New Year of the Trees; however, being part of the “Frozen Chosen,” our climate in Wisconsin did not allow us to plant on the 15th of the month of Shevat!  And so, at our annual congregational meeting in June, the gift was finally dedicated, using a ceremony culled from Jewish sources, and repurposed from a similar tree dedication for a 9/11 memorial we donated to our regional Union for Reform Judaism (URJ) camp, OSRUI, some years ago.

We chose the words “Affirm Life” to adorn the marker that was placed next to the Autumn Blaze Maple that now stands in our synagogue backyard, where Kabbalat Shabbat services are held all summer and picnics, kick ball games, spur of the moment Hebrew lessons, receptions, and concerts sometimes sprout up as well. By the time Sukkot comes ‘round, we will be able to appreciate the “autumn blaze” of that maple tree, as we dine in the sukkah. Our very own “Tree of Life” will witness and inspire Jewish living and learning for generations to come. What better memorial to those who died simply because they lived as Jews, choosing to be present in their congregational home on a Shabbat morning?

As Rabbi Naomi Levy wrote in her beautiful prayer, “A Prayer for the Dead of Tree of Life Congregation,” and which we included in our dedication ceremony:

Their lives have ended
But their lights
Can never be extinguished
May they shine on us always
And illumine our way.
Amen.

Learn about another congregation that has participated in this remembrance project.

Rabbi Dena A. Feingold has served as the spiritual leader of Beth Hillel Temple in Kenosha, Wisconsin, for more than three decades.

View all posts by Rabbi Dena A. Feingold

How to Navigate Congregational Leadership in an Unprecedented Time

How One Congregation Engages Israelis in Synagogue Life

Digital Content to Enliven This Year's Virtual Seder
Mar 26, 2020|the staff of the URJ and other Reform Movement partners

How to Navigate Congregational Leadership in an Unprecedented Time
Mar 18, 2020|Amy Asin