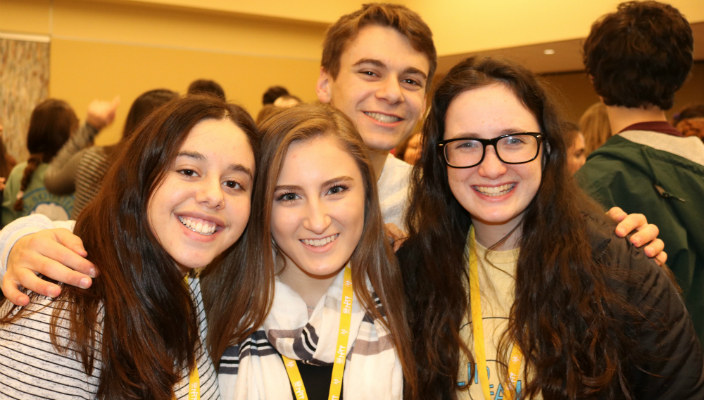 I thought Thursday, September 8th was going to be a typical Thursday evening on a call with teens – an hour-long call in which we’d likely encounter some tech problems, side conversations, and background distractions before everyone rushed off to their next commitment. That night, however, kicked off a new initiative, suggested by a teen leader, that has transformed the way teens in NFTY’s Missouri Valley Region are engaging with each other around social justice issues.

Twice a month, Alex, the NFTY MV Social Action Vice President hosts a Zoom call for teens to get informed and make connections around different social justice topics, including racial justice, gun violence prevention, and more. More than 65 teens have participated in at least one of these calls this year, with teens as far away as Pennsylvania and Georgia logging on each month.

This initiative didn’t start out this way.

Last fall, Alex approached me about hosting a single call for teens to discuss Race Relations in the United States. He participated in programs about race relations last summer at NFTY Mechina and our first regional NFTY event of the year, and wanted to build on the momentum he felt in his NFTY community. His goal was to help teens get more informed about this pressing issue. We brainstormed different ways to achieve his goal and decided to try a webinar to allow teens from all over the region to participate and see one another’s faces or look at the same document. Alex identified the topics he believed were important, created an agenda for the first meeting, and worked to advertise it on social media. He shared the agenda with me so I could be prepared with background information. In short, Alex did most of the planning and implementation for this experiment; I was on the call to help with any technical needs and to fact check when someone had a question that wasn’t answered.

The 15 teens on that first call were captivated; they listened to facts they didn’t know about a basic history in the United States. They asked questions and shared experiences. We went over our 1-hour time because teens were so interested in the discussion. I got off the call feeling like I hadn’t just facilitated a call for teens, but I also learned something myself. I had a chance to hear how our teens really felt about what was happening in their own communities. Energized by the response to the call, Alex and I scheduled several more about different social justice topics – and the teens kept showing up. Now, we host calls twice monthly.

Since that first call in September, we’ve hosted 14 calls covering a range of topics: police brutality, xenophobia, Islamophobia, climate change, criminal justice reform, homelessness, LGBTQ equality, anti-Semitism in the US, and of course, the US election. We’ve had conversations about executive orders, the immigration ban, healthcare and more, driven by what our teens are really seeing in their schools and neighborhoods. Together, our teens have learned about how current events impact different communities and have thought critically about how they can work to make their hopes for the world a reality. Additionally, Alex has provided opportunities for guest leaders to facilitate a call, presenting more teens with leadership opportunities and helping them share the topics about which they are passionate.

This all started because one teen took initiative, and as his adult mentor, I found a way to say “yes” to help him achieve his goal. Rather than seeing the potential problems - teens are so busy! It’ll take too much time to and we might not get a critical mass of participants! – Alex’s enthusiasm encouraged me to find ways to make this idea a reality. These calls are working and continually drawing a core group of teens from across our region and beyond because they are entirely teen-driven. I’m there to set up the technical aspects and be a resource, but our teens provide all the content, conduct the necessary research, and facilitate the calls for their peers.

As youth educators, we want to help our young people become the best version of themselves; to find connections to Judaism and to community; and to be the change they wish to see in the world. With Alex’s leadership, these calls have become a place where teens can ask questions, express themselves, and connect with each other around their passions. We’ve created a safe space and one that they want to be in. I am inspired by their leadership and will carry with me the lesson of the good that happens we can say “yes.”

Beth Lipschutz, MSW,  is the Regional Director for Youth Engagement for NFTY Missouri Valley. In this position, she mentors the Regional Board and other teen leaders as they plan and facilitate immersive educational, religious and social programs for their peers. Beth works to support congregations, clergy and youth workers as the continue to build teen engagement in their own communities. Additionally, she is the NFTY Inclusion Project Manager where she is researching NFTY's inclusion practices to showcase NFTY's strengths and consult around areas for improvement. Over the summer, Beth is the Program Director for the Mitzvah Corps Civil Rights Journey through the South.