"Together, We Can – We Will – Change the Moral Narrative of this Great Country" 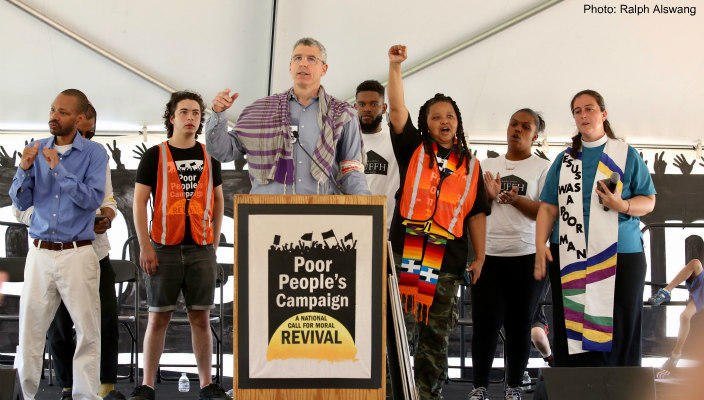 On Monday, June 18, Rabbi Rick Jacobs, president of the Union for Reform Judaism, offered remarks at the Poor People's Campaign: A National Call for Moral Revival rally in Washington, D.C. for the final Monday of action, as part of the 40 days of nonviolent, moral direct action that have served as a launch for the nationwide campaign. Throughout the past six weeks, Reform Jewish clergy, lay leaders, and students have spoken up and demonstrated at days of action in 39 state capitals across the country. To learn more abut the Reform Movement's partnership with the Poor People's Campaign, visit www.rac.org/poorpeoplescampaign.

Here are Rabbi Jacobs' remarks as prepared for delivery. A video of his address is below.

My name is Rabbi Rick Jacobs, I have the privilege of leading the Reform Jewish Movement in North America, with almost two million people, the largest and most diverse Movement in American Jewish life.  We stand proudly today as a partner in this Poor People’s Campaign.  Inspired by the transformational leadership of Rev. William Barber and Rev. Liz Theoharis, the Reform Jewish Movement is working alongside Christians, Muslims, and people of all faiths and those of no faith to stand with the poor and marginalized to ‘unlock the fetters of wickedness… to let the oppressed go free’ and to create a world of wholeness, justice, and compassion, filled with tikkun olam.

Like you I’ve been hearing a lot of talk this week about the Bible and public policy. Seems like a lot of folks leading our country didn’t pay much attention during Sunday school especially our Attorney General, Jeff Sessions. He tried to tell us that the Bible supports this administration’s draconian policy to separate parents and children at our nation’s borders. But you can’t twist the Good Book’s teachings to support such a cruel policy.

I’m sorry AG Sessions but Leviticus’ injunction to “Love the stranger” (Leviticus 19:34) can’t be twisted to mean “you shall hate refugee children.”

Deuteronomy’s commandment, “Do not shut your hand against your needy kinsman” (Deuteronomy 15:7) can’t be twisted to mean “you shall afflict the poor.”

Exodus’ admonition “You shall not oppress the stranger …for you for you were strangers in the land of Egypt”(Exodus 23:9) can’t be twisted to “Be heartless and cruel to the most vulnerable in your midst.”

The Book of Numbers describes the journey of the ancient Israelites through the wilderness of Sinai. On any journey, there is always the danger that people will be left behind.  In the 10th chapter of the book of Numbers verse 25, the Torah spells out the unique role of the tribe of Dan. They are to be M’assef.  This means that they were the ones who made sure that no one was left behind.

This Poor People's Campaign has inherited the tribe of Dan’s sacred work.Together we are to be M’assef, we must gather in all those Americans who would otherwise be left behind: the poor, the widow, the orphan, the physically challenged, immigrants and so many others.

We are here today to change the shameful distorted moral narrative we see unfolding all around us.

Our moral narrative is distorted when families are separated at our borders, infants taken from their mothers’ arms, and our Attorney General cites scripture to justify the abuse. “Give me your tired, your poor, your huddled masses yearning to breathe free, our Lady Liberty proclaims to the persecuted of the world. We are a nation of immigrants and that is our strength!

Our moral narrative is distorted when 2.2 million people languish in America’s prisons and jails, and black men are – on average – six times as likely as white men to be incarcerated. We know that isn’t justice.

Our moral narrative is distorted when some states, including Florida, continue to deny people the right to vote even after they have completed serving a felony sentence, while other states, like Ohio, purge their voter rolls. Our democracy is for all Americans, not just the few. When people are denied their right to vote, our government loses its moral authority.

We believe that our democracy is strongest when everyone can participate.  It is an immense source of pride to us, that both the Civil Rights Act of 1964 and the Voting Rights Act of 1965 were drafted in part in the conference room of our Reform Jewish Movement’s office here in DC. And it is a deeply alarming and painful recognition that we all share that  after Shelby v. Holder, there are fewer protections for voting rights today than there were 50 years ago when these seminal civil rights acts were passed.

That's why, in addition to joining the Poor People’s Campaign, the Reform Jewish Movement has launched with our synagogues across the nation a comprehensive nonpartisan civic engagement campaign to encourage voter registration and participation.

Our moral narrative is distorted when 41 million Americans live below the poverty line and 140 million are poor or low-income.

Jewish tradition teaches us that poverty is the greatest issue facing our society: “If all the troubles of the world are assembled on one side and poverty is on the other, poverty would outweigh them all” (Midrash Exodus Rabbah 31:12). Our sacred texts are also deeply concerned with the fair treatment of laborers. We are commanded to pay workers a fair wage so that they can earn a livelihood.

Fifty-one years ago, Dr. King called people of conscience to join together in a Poor Peoples Campaign.  It’s taken us a while to come together but here we are.

Let us stand together for an America:

where human and civil rights are for all not for some,

where justice is for all, not for some,

where prosperity is for all, not for some,

where health care and quality education are for all, not for some,

where human decency and dignity are for all, not for some.

The God I love is impatient with injustice.

The God I love commands us to stand against discrimination, white supremacy, anti-Semitism,  against systemic racism, against the mass incarceration of black men, against homophobia, transphobia and xenophobia.

But together, we can – we will – change the moral narrative of this great country. We stand here today for the human rights of the vulnerable, the forgotten, committed to be, in our time, in this place, the biblical M’assef, protecting, lifting up, and empowering all those being neglected and harmed by policies that betray our core values as a country.

Forward together, not one step back!

Tune in live as Union for Reform Judaism President Rabbi Rick Jacobs speaks at the #PoorPeoplesCampaign rally in Washington, D.C. on our nation’s distorted moral narrative.

Learn more about the Reform Jewish community's work around family separation, including seven ways you can take immediate action.

END_OF_DOCUMENT_TOKEN_TO_BE_REPLACED 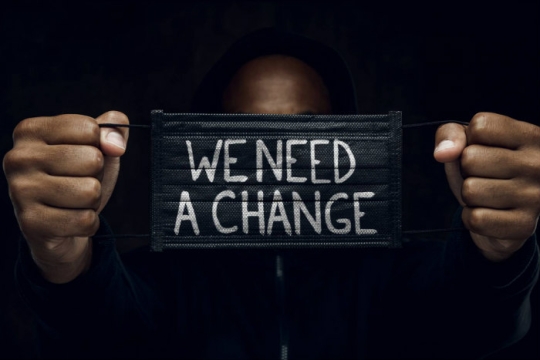 Justice, Justice Shall We Pursue: Resources for Action after the Capitol Insurrection

The Union for Reform Judaism shares resources for use in congregations and Jewish communities, as well as by families and individual, in our shared pursuit of justice.
Audacious Hospitality
Image 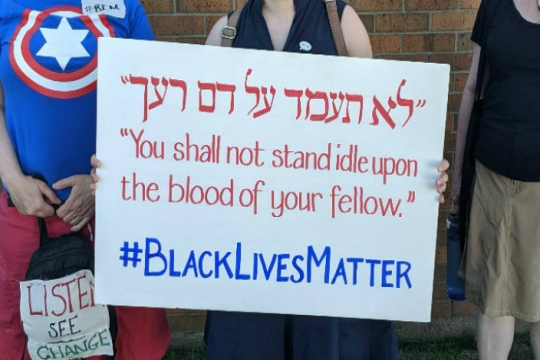 Here are a few things your congregation can do now to support Black and Brown people both within the Jewish community and beyond, both directly and on a systemic level.
View More