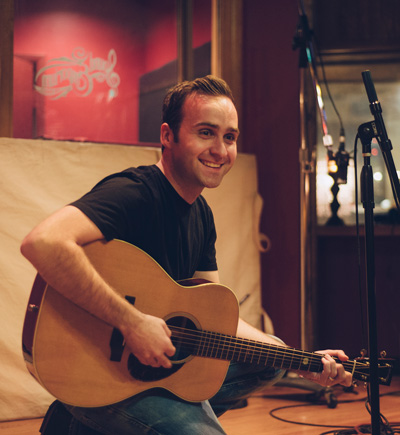 Alan Goodis is a touring Jewish musician playing over 150 events a year. Born and raised in Toronto, Alan is a proud product of URJ Goldman Union Camp Institute. Noted for his dedication to building relationships and community through music, Alan tours throughout the US to serve as an Artist-In-Residence and performer at Temples, Youth Conventions and Jewish summer camps.

In 2009, Alan’s self-titled debut album launched him onto the Jewish music scene with its powerful vocals and bold melodies. Alan is a strong presence in the Reform Jewish movement to engage and empower Jewish youth and adults through music. He’s served as Musical Director for NFTY International Convention and on faculty Hava Nashira. In 2011, he developed Nashir: an NFTY Teen Songleading Institute in partnership with the URJ to provide meaningful Songleader training to high school students. Alan has been a featured performer and presenter at URJ Biennials and the Wexner Foundation. In 2014, Alan released his long awaited full-length studio album “This Place.” Early this year Alan was named to Chicago Jewish 36 under 36. He lives in Chicago with his wife Codi.

Dan Nichols is a singular talent in the world of Jewish music. He is one of the most dynamic, influential and beloved Jewish musicians in North America. Dan’s melodies have become an integral part of the spiritual and liturgical experience of countless individuals and Jewish communities.

Dan is a product of the URJ Jewish camping movement. He has toured Jewish summer camps across North America for the last 15 years. A classically trained singer, Dan received his Bachelor of Music degree in vocal performance at the University of North Carolina. In 1995, realizing the potential of music to make powerful connections with Jewish youth, Dan established the Jewish rock band Eighteen. Since that time, Dan and Eighteen have released 11 albums. Songs like, L’takein (The Na Na Song), B’tzelem Elohim, Kehillah Kedoshah, Chazak, Hoshia, and Sweet As Honey and have become Jewish communal anthems throughout North America. Dan tours over 180 days each year, where he often serves as artist-in-residence and teacher for congregations and camp communities.   Dan has been featured at conferences and conventions of nearly every major Jewish movement, including the URJ Biennial, NFTY Convention, BBYO International, Limmud and the Wexner Heritage Program. Dan lives in Raleigh, North Carolina with his wife Elysha and his daughter Ava.