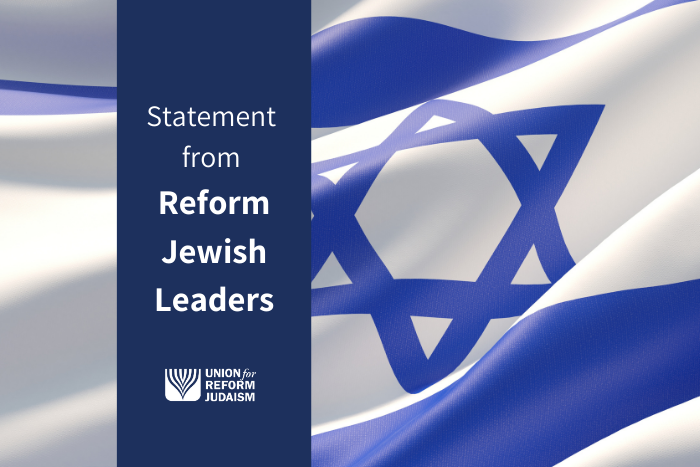 The Union for Reform Judaism condemns the recent judicial reforms proposed by Justice Minister Yariv Levin. If implemented, these reforms will dramatically weaken Israel’s democracy, eviscerating any meaningful checks and balances that provide a separation of powers – a backbone of secure democracies. Allowing the Knesset to override Supreme Court justices’ decisions with a 51% majority would strip the Supreme Court of a crucial element of its power to protect fundamental rights, mitigate abuse of power by the government, and enable the Knesset to pass laws that violate Israel’s Basic Laws. The Knesset must not become a vehicle for tyranny of the majority.

Because Israel has no constitution, no bill of rights, and no second parliamentary chamber, the High Court is the only check and balance in existence. Once these “reforms” are instituted, the people in power need never relinquish it. There will be no other branch of government to rein them in. Levin’s specious claims deriding rulings from unelected judges are, of course, contrary to a key part of what allows justices to remain outside the system and serve as independent arbiters providing essential checks and balances. The courts serve the critical function of protecting minority rights, which is the backbone of any democracy. These proposed changes are particularly egregious given that the current coalition is specifically attacking the rights of Reform Jews, members of the LGBTQ+ community, Arabs and Palestinian-Israelis, and other minorities. Minority groups are best protected by the courts and without the basic separation of powers, many millions of people will be vulnerable to the whims of a narrow majority bent on imposing their will on all of society.

The Government of Israel and Jewish organizations around the world should heed carefully the urgent warnings of Israeli judicial experts such as former Supreme Court Justice and former Attorney General Menachem Mazuz, who recently stated:

“I don’t know of anything in the literature of political science that will enable a country [with a separation of powers as delineated by [Minister] Levin’s plan] to be considered a democracy.... in such a reality, effectively in Israel the only body that can rein in a tyranny of the majority is the judicial system. This restrictive power, they want to annul.”

We call on Minister Levin to withdraw his proposal, and on all lawmakers to unequivocally reject it. Alan Dershowitz, a legal scholar and strong supporter of Prime Minister Netanyahu, told Israeli Army Radio “If I were in Israel, I would be joining the protests...It would be a tragedy to see the Supreme Court weakened.” We urge ohavei Yisrael, those everywhere who love Israel – in the Diaspora communities and in democratic nations across the globe, to express their alarm and dismay about these proposed attacks on Israel’s democracy.