December 17, 2019 - A sacred artifact of Jewish history – a Torah scroll that miraculously survived destruction during the Holocaust and was cherished for decades by generations of North American Reform Jewish youth leaders at URJ Kutz Camp in Warwick, NY – will be returned home as a symbol of the rebirth of Jewish life in Central Europe. Reform Jewish Movement leaders chanted from this remarkable Torah scroll during Shabbat worship services at the URJ Biennial, the largest Jewish gathering in North America, and then the symbolic transfer announcement of this Torah was made.

This Sefer Torah – the sacred text of Judaism, containing the five Books of Moses – was written in 1890 in the town of Brno, modern day Czech Republic, and loaned by the Memorial Scrolls Trust in London to the Union for Reform Judaism’s Kutz Camp in 1974, with generous support of Rabbi Peter Kasdan and his family.

It is Scroll #1052 of the Memorial Scrolls Trust, and for nearly fifty years, it served as the Trust intended, providing an opportunity for the youth of North America to learn from its teachings and be inspired by its history. For decades at URJ Kutz Camp in Warwick, NY, rabbis, cantors, educators, youth professionals, lay leaders, and aspiring leaders of NFTY – the Reform Jewish Youth Movement, have continuously chanted and read from this scroll, have held it close, and studied its lessons. It was sustained and supported by the dedicated Kutz Camp community, who succeeded in developing the next generation of Reform Jewish leaders in North America and throughout the world.

Now, with the partnership and support of the World Union and European Union for Progressive Judaism (WUPJ, EUPJ), the sacred scroll will be returned to the Trust in London and then reallocated on loan to a new home, a new progressive Jewish community, Ec Chajim Praha. The Torah is a redemptive and uplifting symbol not only of the pain of Jewish history but primarily about the promise of the Jewish future within an emerging, living new Jewish community in the land of its origin.

Also present during the Torah service was Maya Levy, NFTY president, representing Kutz Camp, NFTY and the URJ and Carole Sterling, Chair of the World Union for Progressive Judaism.

David Maxa, soon to be ordained as a rabbi from Abraham Geiger Kolleg in Potsdam, will accept the Torah from the Trust for the newly founded congregation serving the progressive Jewish community in Prague, where he will begin serving as rabbi next summer. Maxa used the same scroll as the Torah Corps teacher at Kutz Camp, and now – together with Scroll #1052 itself – he becomes a living link between the Reform Jewish movement in North America and the progressive Jewish community in Europe, between the past and the future.

The Torah’s new home in Prague is approximately a drive of two hours from Brno, where it was first written by a Torah scribe almost 130 years ago. The Jewish community in Brno dates back to the 13th century.

World Union for Progressive Judaism President, Rabbi David Saperstein said, “Placing this beloved Torah scroll in David Maxa’s arms during Shabbat services at the URJ Biennial brings the miraculous journey of this Sefer Torah full circle. This moment represents many blessings – a bridge across time and continents, and a witness to the survival and resilience of the Jewish people over a century of generations, l’dor vador. May this Torah continue to forge connections and inspire the Jewish community in Prague as the Reform Jewish community has been inspired by it at Kutz Camp, which brought together teens from across North America and around the world for these many decades.”

To watch the Torah service, view the archived video of the URJ Biennial Shabbat morning services at URJ.org/Biennial. 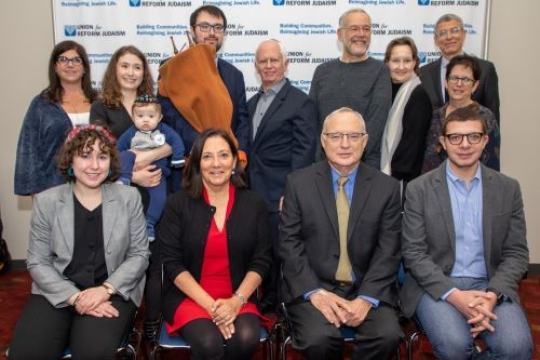