Rabbi Rick Jacobs is president of the Union for Reform Judaism, the most powerful force in North American Jewish life. The URJ leads the largest and most diverse Jewish movement in North America, with nearly 850 congregations reaching nearly 2 million people. For nearly 150 years, the URJ has been at the forefront in promoting an open, progressive Judaism.

The URJ’s programs and communities inspire more and more people—from children to seniors—to explore what it means to be Jewish, pursue justice around the world, and forge stronger ties to Israel. Under the dedicated and creative leadership of Rabbi Jacobs, the URJ is engaged in the ongoing implementation of the URJ’s strategic 2020 Vision, a bold and ambitious action plan for the future of Reform Judaism structured around three core priorities: Strengthening Congregations, Audacious Hospitality and Tikkun Olam (social justice).

A longtime and devoted creative change agent, Rabbi Jacobs spent 20 years as a dynamic, visionary spiritual leader at Westchester Reform Temple (WRT) in Scarsdale, New York. During his tenure, he reshaped communal worship, transformed the congregation into a community of lifelong learners, and strengthened the synagogue's commitment to vibrancy and inclusion. Under Rabbi Jacobs' leadership, WRT completed a new "green" sanctuary, one of only a handful of Jewish houses of worship in the nation to carry this designation.

Prior to his tenure at WRT, Rabbi Jacobs served the Brooklyn Heights Synagogue, where he founded and co-directed the first synagogue-based homeless shelter in New York City. He was ordained in 1982 by Hebrew Union College-Jewish Institute of Religion (HUC-JIR) in New York, where he received numerous excellence awards. Deeply committed to the State of Israel, Rabbi Jacobs has studied for two decades at Jerusalem's Shalom Hartman Institute, where he is now a senior rabbinic fellow.

Rabbi Jacobs is a product of the Reform Movement, and has held numerous leadership posts within the URJ, the CCAR, ARZA and WUPJ. He also has served on the boards of Jewish organizations in the community-at-large, including American Jewish World Service, UJA-Federation of New York, and, since its inception in 1996, Synagogue 2000 and its successor, Synagogue 3000.

Dedicated to global social justice issues, Rabbi Jacobs was part of a delegation that assessed disaster response following Haiti's devastating earthquake in 2010.  He also observed the plight of Darfur refugees as part of an international humanitarian mission to the Chad-Darfur border area in 2005, and in 2009, participated in an annual conference of Muslim and Christian leaders, held in Qatar, designed to build understanding between the West and the Muslim world.

Coronavirus and Your Congregation: What to Consider, How to Prepare, and More
Mar 02, 2020|Rabbi Rick Jacobs 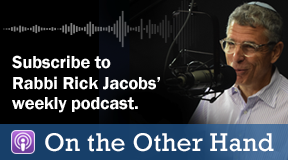 Coronavirus and Your Congregation: What to Consider, How to Prepare, and More
Mar 02, 2020|Rabbi Rick Jacobs