Working in Solidarity Against Anti-Asian Hate 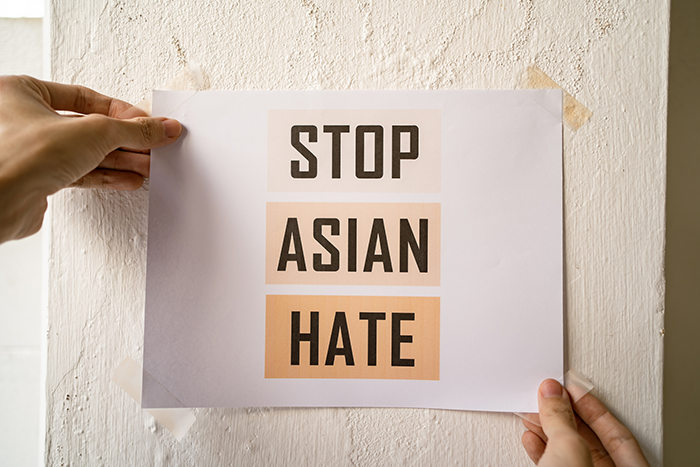 In the past two years, the simultaneous spike in anti-Asian and anti-Semitic violence has brought my identity as an Asian American Jewish woman into sharp focus. In fact, here in New York City, I have keenly felt the sharp rise in hate crimes against Asian Americans and against Jews.

As a Jew of Color, strangers do not readily identify me as Jewish, and I confess to not worrying much about anti-Semitic threats to my personal safety outside of the synagogue setting. True, when I chose Judaism as an adult and chose Ruth as my Hebrew name, I had cast my lot with the Jewish people. However, I could never have imagined coming home from a joyous Shabbat morning service one Saturday in January and then spending the rest of the day furiously refreshing my news feed about a hostage situation unfolding at another Reform synagogue in Colleyville, Texas. As a lay leader at Temple Shaaray Tefila in New York City, I have been in a constant state of alert as the clergy, the staff, and my fellow lay leaders discuss how to keep our synagogue and our community of congregants, clergy and staff, nursery school children, and religious school students safe. And on that January day, as I had when the Tree of Life Synagogue and the Poway Synagogue were attacked, I felt the reach of anti-Semitism in a visceral way.

As an Asian American woman, my fear for the safety of Asian American women-including my biracial daughters, my elderly mother and my sister, and my colleagues, friends, and students - is more constant and intimate. Since the start of the COVID-19 pandemic, there has been a dramatic rise in hate and violence targeting Asian Americans. As of December 2021, StopAAPIHate, which has been tracking anti-Asian hate reported by Asian American since the start of the pandemic, has accumulated repots of 10,750 hate incidents, 58% of which occurred in 2021. As an applied psychology scholar with a specialty in Asian American mental health, I have also been examining the mental health impact of COVID-19-related discrimination against Asian Americans. Our research team at New York University has found an alarming number of hate incidents (ranging from being shunned or verbally harassed, to physically threatened or assaulted). Closer to home, my daughters had been harassed with racial epithets, were spat on, and had felt menaced and threatened in public spaces within the past year. The recent spate of violence in New York City-especially the tragic murders of Michelle Go and Christina Yuna Lee-has only heightened the sense of vulnerability among Asian American communities.

Amidst the seemingly weekly-and sometimes daily-reports of anti-Asian violence, the Atlanta spa shooting on March 16, 2021 stands out in our collective trauma because the gunman had specifically targeted Asian women who worked in massage parlors. After perpetrating the horrific shooting spree at 3 separate Asian spas or massage parlors that killed 8 people, including 6 immigrant Asian women, the gunman told the police that his crime was motivated by sexual addiction and that he had wanted to eliminate the spas as a source of sexual temptation. The local sheriff's seeming dismissal of the loss of 8 lives because the suspect was "having a bad day" added insult to injury, because we, Asian American women, could clearly trace this extreme act of hateful violence to the racialized misogyny that has fetishized Asian American women throughout U.S. history.

As a Jewish Asian American woman, there have been moments in the past when my loyalties and allyship were questioned and challenged, and I had felt torn between the opposing views of my Jewish and Asian American communities. Yet, at the present moment, it feels like my two identities-as a Jew and as an Asian American-are in parallel spaces that do not seem to cross. But why should that be, when both anti-Semitic and anti-Asian hate and violence are on the rise? That is, why are Jews largely silent about the rise in anti-Asian hate? And why are Asian Americans largely silent about the rise in anti-Semitism? The two communities may not feel a close sense of shared fate, yet we - Asian American Jews - are here as embodiments of the connection. We are here to insist that our communities acknowledge one another, listen to each other, and work in solidarity against hate.

Sumie Okazaki is a Professor of Applied Psychology at New York University. She conducts research on the impact of immigration, social and culture change, and race on Asian and Asian American adolescents, emerging adults, and parents within local and transnational contexts. With colleagues in anthropology, education, and developmental psychology as well as community partners, she has ongoing research projects with urban Chinese American adolescents and immigrant young adults in New York City; Chinese parents and adolescents in Shanghai and Nanjing, China; Korean American and Filipino American adolescents and parents in Chicago; and current and former Korean early study abroad students in New York City, the Philippines, and South Korea.

Her most recent book, co-authored with Nancy Abelmann, is titled Korean American Families in Immigrant America: How Teens and Parents Navigate Race (2018, NYU Press). She has also co-edited three books: South Korea’s Education Exodus: The life and Challenges of Early Study Abroad (2015; with Adrienne Lo, Soo-Ah Kwon, & Nancy Abelmann), Asian American Psychology: The Science of Lives in Context (2002; with Gordon C. N. Hall) and Asian American Mental Health: Assessment Theories and Methods (2002; with Karen Kurasaki and Stanley Sue). She was the President of Asian American Psychological Association (2013-2015) and has served as an Associate Editor of the journal Cultural Diversity and Ethnic Minority Psychology (2004-2011). She is the recipient of Early Career Award and Distinguished Contribution Award from Asian American Psychological Association, Emerging Professional Award from the Society for the Psychological Study of Ethnic Minority Issues, and Early Career Award and Dalmas Taylor Distinguished Contribution Award from the American Psychological Association Minority Fellowship Program. Okazaki received her doctorate in psychology from UCLA in 1994 and has taught in the psychology departments and Asian American Studies programs at the University of Wisconsin-Madison and the University of Illinois at Urbana-Champaign prior to coming to Steinhardt.