Written April 13, 2017 by the Ethical Policies and Procedures Task Force of the Union for Reform Judaism, with portions adapted directly from the CCAR, ACC, and URJ employee ethics codes.

If you have questions about the Ethics Code or reporting an ethics complaint, please contact the URJ Ethics Chair at ECChair@urj.org.

At the Union for Reform Judaism (URJ), we hold ourselves and one another to the highest standards of personal and professional integrity, moral conscience and social responsibility. The first section of this document gives voice to those standards. The second section describes the structures and processes necessary to implement and enforce the Ethics Code with respect to volunteers and embed it into the culture of the URJ.

The Ethics Code concerns the actions of URJ volunteers, as well as interactions between volunteers and employees. Employer/employee situations are governed by the URJ’s Employee Handbook as are disciplinary, supervisory and other matters. Complaints about Reform Movement professionals who belong to a Reform Movement professional organization should be referred to that organization’s ethics committee:

The URJ retains the services of an independent Ombuds (ombudsurj@gmail.com) who can be contacted with any and all questions about the Ethics Code processes, including how and where to file a complaint.
In our work for the URJ, we pledge ourselves to be scrupulous in our adherence to this Ethics Code and to hold ourselves and our colleagues to the highest standards.  At the same time, we feel called to heal brokenness and to seek to balance midat hadin (principle of justice) and midat harachamim (principle of compassion) in all we do.

What follows is a living document, which regularly will be updated and revised in the light of experience, to guide our conduct in serving the URJ.

We are obligated to conduct ourselves at all times according to the highest standards of moral behavior. These standards include modeling Jewish values in our family, social and financial affairs. Whether in our work or personal lives, we must conduct ourselves with honesty and with respect for others.

B. Stewardship of Relationships

Congregations, donors and volunteers support the URJ because they trust its leaders and volunteers to carry out their responsibilities in accordance with Jewish values, to be excellent stewards of resources and to uphold rigorous moral and legal standards of conduct around financial matters.

We are responsible for ensuring that personal and sexual boundaries are respected in our relationships with others. Bullying and sexual misconduct are both inconsistent with respecting the dignity of human beings.  URJ volunteers are obligated to refrain from all such behaviors when interacting with other URJ employees, volunteers or program participants in URJ-related activities.

Confidentiality involves acknowledging the sensitivity of information, especially as it pertains to personal or private information about an individual — including employees, volunteers and donors — regarding the URJ, a synagogue or other sacred community.

On occasion, it may be appropriate and essential to break confidentiality so as to avoid physical or emotional harm to individuals at risk, particularly minors, or to report illegal behavior. Unless otherwise required by law, such situations and decisions rest with the URJ Board Chair and President, who may discuss such matters with the URJ General Counsel and consult other members of the URJ’s senior leadership and outside professionals before deciding whether disclosure of the situation is necessary.

URJ volunteers should demonstrate professionalism and good judgment when using any communication technology. Care must be taken to protect confidentiality when required. This is especially the case when using social media, including blogs, message boards, chat rooms, electronic newsletters, online forums, social networking sites, and other sites and services that permit users to share information with others.

Effective implementation of the Ethics Code involves three related but distinct functions, all of which are within the province of the URJ Ethics Council (EC), actively coordinating where appropriate with similar bodies established by the URJ’s partners and affiliates:

A. Role and Structure of the Ethics Council

The EC is responsible for adjudicating decisions for each complaint, recommending revisions to the Ethics Code and providing training and education. The EC may execute some of these responsibilities through subcommittees or task forces that include individuals, appointed by the URJ Board Chair, who are not members of the EC.

All EC business may be conducted either in-person or by using remote meeting technology, or a combination thereof.

B. The Ethics Review Board

For purposes of reviewing EC decisions recommending the sanction of suspension for a stated period or removal from a URJ volunteer position, the URJ Officers shall be constituted as the Ethics Review Board (ERB).  In addition, the URJ Board Chair may name up two additional NAB members to serve on the ERB if a URJ Officer is unable to serve in that capacity.

All URJ management, staff, NAB members and other URJ volunteers will be informed of URJ ethics procedures.

Persons receiving a complaint should respond compassionately but should not make judgments as to the existence or not of ethical misconduct. They should inform the complainant about the procedure for making a complaint and may offer assistance in reporting the matter to the appropriate entity, if needed.

B. Decision of the EC and Sanctions

The decision of the EC shall be in writing and clearly set forth the rationale upon which it is based including the applicable section(s) of the Ethics Code. The standard for decisions is preponderance of the evidence, i.e., more probably true than not. In each case the EC shall keep a record of all aspects of the case including correspondence, interview notes, statements and the like. The decision should also include the date of the vote, the vote count, and the members of the EC who participated in the vote. All decisions must be made with at least a quorum of the EC present and voting.

The following describes the possible outcomes of the adjudicatory process and the provisions for reinstatement after a suspension or removal.

All parties are expected to cooperate with the EC throughout the process of investigation and adjudication. Failure to cooperate may be taken into account in deciding whether and how to proceed and determining sanctions, if any.

If the respondent fails to cooperate with the EC due to a concurrent legal process, the EC may wait until the legal process is completed to adjudicate or impose sanctions.

If the respondent resigns from his/her URJ volunteer role during the process of information gathering but prior to the adjudicatory process, the respondent will be regarded as removed and must apply for reinstatement to serve the URJ in accordance with paragraph II.D.2.d above. Readmission must be conditioned upon the resumption of the process of information gathering and the adjudicatory process.

If the fact that a complaint for breach of the Ethics Code was filed has become public and, after a decision by the EC that the complaint is dismissed, the EC should remain mindful of the potential damage to the respondent’s reputation and position caused by the publication of an invalid complaint. If requested by respondent and deemed necessary by the EC in light of all the circumstances, the EC may take appropriate steps to help restore the respondent’s good name and stature.

If the EC finds that the complaint is mischievous, malicious or vindictive, the EC shall lend moral and practical support to the respondent’s reasonable demands for apology from the complainant and vindication before the URJ. Also, if a complaint filed under such circumstances is a violation of this Ethics Code, it shall be handled in accordance with the terms of this Code.

Any member of the North American Board, officer or employee of the URJ may be considered to have a direct or indirect interest in, or benefit from, an organization or transaction if any of the following have such an interest or benefit: 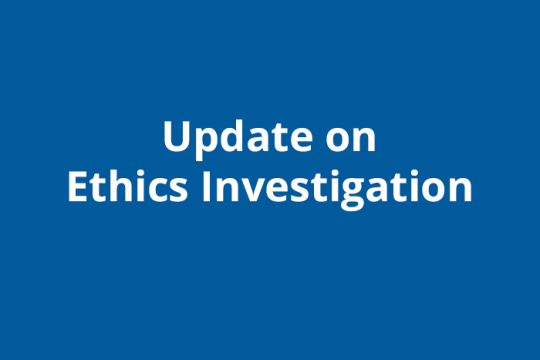 Earlier this year, the URJ retained Debevoise & Plimpton, a leading law firm, to conduct an independent, comprehensive, and impartial investigation into sexual harassment, abuse, and misconduct. Today we are sharing the full investigation report.

The URJ is committed to maintaining ongoing avenues for reporting concerns and allegations. If you have experienced or witnessed sexual harassment, abuse, or misconduct, please reach out to report@urj.org or URJInvestigation@debevoise.com.