August 17, 2021 - The Union for Reform Judaism, the Religious Action Center of Reform Judaism, and the entirety of the Reform Movement mourn the passing of Rabbi Richard Hirsch. As one of the giants of Reform Jewish life in the second half of the 20th Century, his work shaped Reform Judaism in the U.S., Israel and throughout the world until his death – just a month shy of his 95th birthday.

Rabbi Hirsch’s most lasting impact on the Reform Jewish Movement in North America was serving as the founding Director of the Religious Action Center of Reform Judaism (1962-1973), the social justice and public policy arm of Reform Judaism. His impact in Israel and on a global level was most felt through his presidency, for 26 years (1973-1999), of the World Union for Progressive Judaism, the international arm of Reform Judaism. By moving WUPJ’s headquarters to Jerusalem he nurtured Reform Jewish communities in Israel and around the world (particularly in the former Soviet Union after 1990). Rabbi Hirsch was also instrumental in the founding of ARZA and ARZENU, strengthening connections between Reform Jews and the land, people and State of Israel, and he played prominent roles in the Jewish Agency and the World Zionist Organization. Indeed, in the 2010 Israeli Independence Day celebrations, Rabbi Hirsch was one of twelve prominent Israelis invited to light the ceremonial torch – the first Reform Rabbi so honored.

“A gifted congregational rabbi and one of the URJ’s most effective regional directors before assuming his roles in our North American and our international arms, Rabbi Hirsch will go down in history as one of Reform Jewry’s great institution builders. His leadership of the World Union and our Religious Action Center helped shape today’s Reform Judaism just as his contributions to building Reform Judaism in Israel and his influential role in the Jewish Agency and World Zionist Organization won him admiration across wide swaths of Israeli society. The close relations he forged with many key political, social justice, civil rights, and interfaith leaders, both in Israel and the United States, were central to his successes and a source of his lasting legacy. I know how proud Dick and his beloved Bella were of his children, each of whom has reached prominence in their respective fields, including Rabbi Ammi Hirsch, a gifted congregational rabbi and former head of ARZA, who carries on his family’s Zionist tradition with immense passion and skill. And their grandchildren were also sources of joy and pride."

"Dick Hirsch is an activist and institution builder, as well as a man of great passion and soaring ideals. He is committed to the idea of one Jewish people and to the upbuilding of the Jewish State, and he believes with all his heart that Reform Judaism needs Israel just as Israel needs Reform Judaism.”

After serving as a rabbi at Temple Emanuel in Chicago and Temple Emanuel in Denver, and then as our Movement’s Chicago regional director, Rabbi Hirsch assumed his position as the first Director of the RAC.  Rabbi Hirsch quickly became a respected mainstay both in the interreligious community of national denominational representatives and among the national representatives of Jewish organizations. He helped found the Washington Interfaith Staff Community, the coordinating body of a broad range of national denominational and faith-based organizations engaged in advocacy work on Capitol Hill and with the executive branch. Particularly close to the Israeli embassy, he was also a close ally of Si Kenan, the founder of the American-Israel Public Relations Council (AIPAC) during AIPAC’s formative years of the 1960s and early 1970s.

Rabbi Hirsch built the RAC’s advocacy presence in Washington and was a key supporter of the Leadership Conference on Civil and Human Rights (LCCR) during its formative years, opening the RAC’s doors to house the LCCR for over 30 years, with the civil rights community’s contributions to the Civil Rights Act of 1964 and the Voting Rights Act of 1965, drafted largely in the RAC’s conference room. His relationship with Dr. Martin Luther King, Jr., to whom he provided office space for some of Dr. King’s visits to the DC, and for whom he was the Jewish community’s eulogizer at the Washington, D.C. memorial service, was indicative of his close relations with a broad range of the mid-century’s most prominent civil rights leaders.

Rabbi Hirsch authored and edited several study guides on Jewish perspectives on contemporary policy and social justice issues, widely used by rabbis for sermons and adult education classes.  Together with his Associate Director, Marvin Braiterman, a respected church-state lawyer, he expanded the Movement’s work for religious freedom and church-state separation. It was on these foundations that the RAC became, as JJ Goldberg wrote in his book, “Jewish Power,” “one of the most powerful Jewish bodies in Washington, second only to AIPAC.”

As Rabbi Jonah Pesner, Director of the RAC, noted:

“Rabbi Hirsch’s passage marks the end of an era – the last of the remarkable social justice figures that Rabbi Maurice Eisendrath gathered around him in the 1950s and ‘60s to build our Movement’s influential and effective social justice presence in North America. Their legacy lives on in the daily social justice work of our synagogue social action committees, our rabbis, the RAC, and our national leadership. Tikkun olam remains a hallmark of Jewish life today in no small measure because of what Rabbi Hirsch and his colleagues achieved.”

During his WUPJ tenure, Rabbi Hirsch emerged as a master-builder of indigenous Reform/Progressive Judaism in Israel in its formative years of growth, marshaling critical financial resources and hands-on shepherding that led to significant growth of affiliated synagogues in Israel, the launch of two kibbutzim (Yahel in 1976 and Lotan in 1983) and a robust cultural and educational program at the WUPJ’s Beit Shmuel and Mirkaz Shimshon in Jerusalem. He was deeply committed to the importance of growing a generation of home-grown leaders and of an Israeli Reform Jewish ideology and theology.  He nurtured all that, and ensured it the space and authority to evolve.

At the same time, Rabbi Hirsch greatly expanded the number of countries in which there was a Reform Jewish presence (today reaching 50 nations worldwide) and played a particularly effective role in building the Reform Movement’s presence in the former Soviet Union after 1990. (His beloved wife Bella was of Russian birth, spoke the language fluently, and was of immeasurable assistance to Rabbi Hirsch’s efforts there).

A prime mover in affiliating Reform Judaism with the Jewish Agency and World Zionist Organization, during his WUPJ tenure and after his retirement, he continued his work for the Jewish Agency, serving as Co-Chairman of its Commission on the Former Soviet Union and Eastern Europe and as the Chair of the World Zionist Organization’s Central Committee (Vaad Hapoel). The significant respect he was accorded was perhaps most represented by his election as President of the 33rd World Zionist Congress.

Few individuals have had a more significant impact on Reform Jewry in North America and around the world as had Rabbi Richard Hirsch. His contributions will echo through the generations and his memory will continue to be a blessing.

For those wishing to send condolences and share remembrances with his family, please convey them through Rabbi Ammi Hirsch: 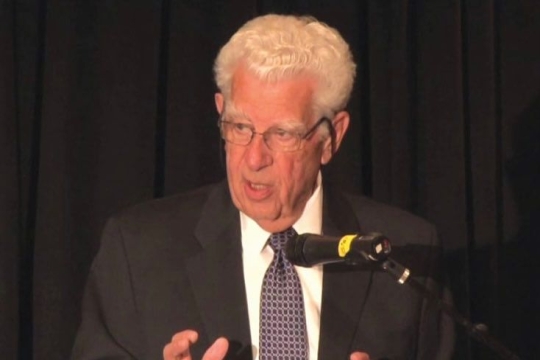